Summary
Jesus Calms a Storm, Jesus Heals a Man with a Demon

And He said to them, “Where is your faith?” They were fearful and amazed, saying to one another, “Who then is this, that He commands even the winds and the water, and they obey Him?”
~ Luke 8:25

And when He came out onto the land, He was met by a man from the city who was possessed with demons; and who had not put on any clothing for a long time, and was not living in a house, but in the tombs. Seeing Jesus, he cried out and fell before Him, and said in a loud voice, “What business do we have with each other, Jesus, Son of the Most High God? I beg You, do not torment me.” For He had commanded the unclean spirit to come out of the man. For it had seized him many times; and he was bound with chains and shackles and kept under guard, and yet he would break his bonds and be driven by the demon into the desert. And Jesus asked him, “What is your name?” And he said, “Legion”; for many demons had entered him. They were imploring Him not to command them to go away into the abyss. Now there was a herd of many swine feeding there on the mountain; and the demons implored Him to permit them to enter the swine. And He gave them permission. And the demons came out of the man and entered the swine; and the herd rushed down the steep bank into the lake and was drowned. When the herdsmen saw what had happened, they ran away and reported it in the city and out in the country. The people went out to see what had happened; and they came to Jesus, and found the man from whom the demons had gone out, sitting down at the feet of Jesus, clothed and in his right mind; and they became frightened. Those who had seen it reported to them how the man who was demon-possessed had been made well. And all the people of the country of the Gerasenes and the surrounding district asked Him to leave them, for they were gripped with great fear; and He got into a boat and returned. But the man from whom the demons had gone out was begging Him that he might accompany Him; but He sent him away, saying, “Return to your house and describe what great things God has done for you.” So he went away, proclaiming throughout the whole city what great things Jesus had done for him. ~ Luke 8:27-39 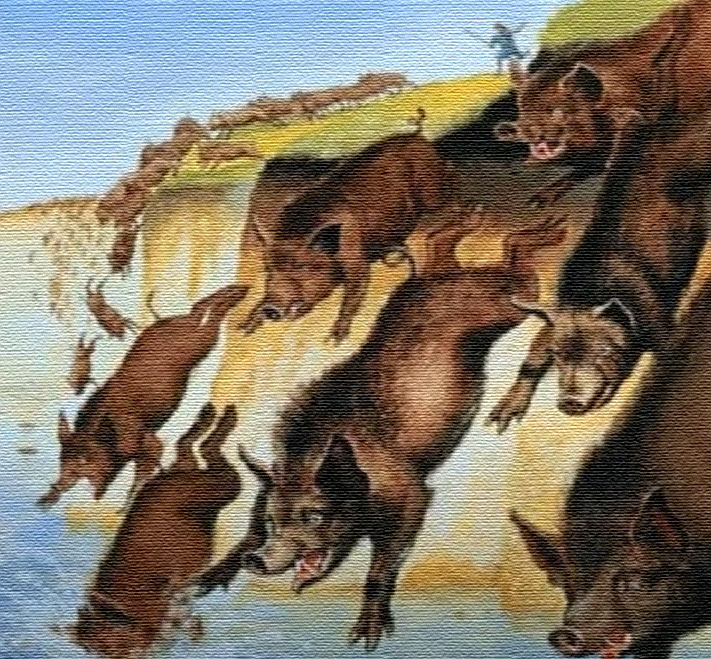 And the demons came out of the man and entered the swine; and the herd rushed down the steep bank into the lake and was drowned. ~ Luke 8:33

The Gospel of Luke Audio